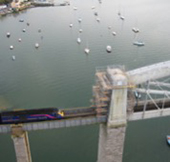 There are many technologies to monitor the traffic load in both the road and rail sectors, i.e., weighing vehicles while they are in motion. These so called Weigh-in-Motion (WIM) systems are used to collect data on gross and axle weights and can be used to reduce the uncertainty in load models employed in bridge design and assessment.

A subset of the many WIM technologies is Bridge WIM, a concept whereby an instrumented bridge is used as the scales to weigh vehicles as they pass overhead. Bridge WIM was first introduced in the 1970’s, and then further developed by UCD and others, being currently in commercial use in the road industry. It is not established in the rail sector although there have been some limited trials.

The idea of combining the concept of Bridge WIM with condition assessment has not been tested, but there are indications that the component of a signal relating to one axle of a vehicle is much more sensitive to changes in bridge condition than the entire signal. This would suggest that there is potential to apply the Bridge WIM equations to a measured bridge signal and to use that component as an indicator of bridge condition. FSDL will test this approach based on their experience in dynamic measurements for health monitoring.

It is proposed to apply techniques of structural identification (St-Id) to railway bridges by combining known information about train loading and measurements of structural deformation and time derivatives during train passage. Known train loads and bridge responses will be used to identify the structural characteristics of the bridge. Then techniques of Moving Force Identification (MFI) – the dynamic equivalent of Bridge WIM will be used to estimate to the forces applied by the passing train. This method can be used to assess either anomalous loads or changes in bridge condition and safety. A combination of data from high quality optical tracking system and accelerometers will be used for the measurements.

Expected Results: Innovative methods for estimating and updating the condition and safety of railway bridges based on train load and bridge condition data from measurements on selected bridges.

The project involves a secondment of some months to University College Dublin (UCD) (supervised by Prof. OBrien). The ESR will apply a MFI and St-Id methods developed by UCD and FSDL to develop assessment procedures and estimate their reliability. In UCD, (s)he will build a bridge Finite Element (FE) model and take relevant lectures in the bridge engineering module.

You can follow blog and publications by ESR7 below.