Sofia Antonopoulou (ESR1) and Siyuan Chen (ESR14) supported the Communication Office of DG Research & Innovation at their Horizon 2020 stand in the EU Contest for Young Scientists (EUCYS)  2018 on Sunday 16 September session, held in RDS, Merrion Road, Ballsbridge, Dublin 4. This is an event open to the public, which allowed the stand to be visited  by EUCYS attendees, composed by their contestants, aged 14-20, as well as other visitors and schools. Siyuan covered the morning shift (9:30 am to 1:30 pm) and Sofia did the afternoon (1:30 pm to 5:30 pm). There were only 10 places available to MSCA fellows, and given the high reply rate, the DG Communication Office had to select those ESRs to be present at the EU stand. This selection aimed to have as many projects as possible to give EUCYS contestants the possibility of discovering more fields of research. Siyuan shared the stand with an ESR (TCD – Health Science) from TRAIN-EV ITN and Sofia shared it with an ESR (UCD – Agrifood Engineering) from CerealPath ITN. In this way, students and visitors saw different things and the fellows themselves met other researchers.

This is the 30th edition of EUCYS, which attracted a total of 139 contestants from 38 countries (mostly from EU, but also non-EU such as China, Canada and Israel). The opening ceremony was addressed by Irish President Michael Higgins on the 15th September. During EUCYS, Sofia and Siyuan welcomed the interested contestants and visitors at the EU stand, sharing their experience with them, and promoting the possibility of a career in research. For this purpose, Sofia and Siyuan distributed brochures and books among attendees, and presented their projects in a didactic way using audio-visual material (videos showing how Braided Fiber Reinforced Polymers -BFRP- are designed and built for application in the construction industry, how drones are able to carry out a 3D reconstruction of a structure via capture of images while flying around it, and also videos about other projects in TRUSS ITN) and small objects (BFRP where students could test the high strength to weight ratio of this novel material) to tell about their research project, their research career, how EU (and the MSCA scheme in particular) helped them to move on with their professional objectives, and how EU invests in R&I through them. It is expected that the presence of Sofia and Siyuan will have served as inspiration for the future career of many EUCYS contestants. 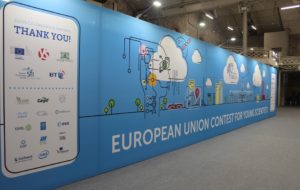 EUCYS board at the entrance 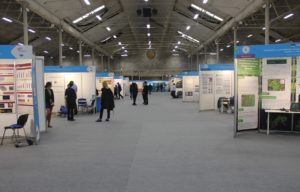 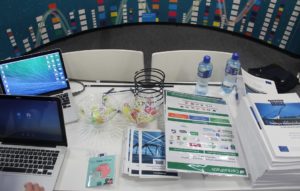 Table at the European Commission stand 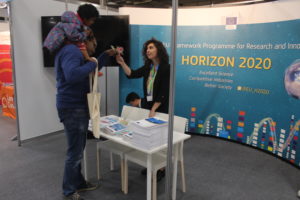 High success of TRUSS lollipops among the youngest 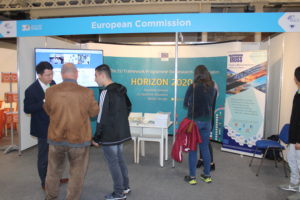 Siyuan (ESR14) interacting with the public 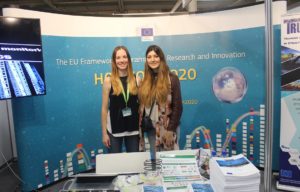 The EU Contest for Young Scientists (EUCYS) is part of the Science with and for and Society activities managed by the Directorate-General for Research of the European Commission. You can find out more about Science with and for and Society via the web site, which also contains a page on the Contest for Young Scientists. The European Union Contest for Young Scientists was set up at 1989 to promote the ideals of co-operation and interchange between young scientists. The Contest is the annual showcase of the best of European student scientific achievement. EUCYS gives students the opportunity to compete with the best of their contemporaries at European level. The young scientists also have the chance to meet others with similar abilities and interests and some of the most prominent scientists in Europe. In this way, the Commission seeks to strengthen the efforts made in each participating country to attract young people to careers in science and technology. (source: https://btyoungscientist.com/eucys-2018/)