Interviews to fellow in Italian magazine and newspaper

The journalist Eugenio Milizia interviewed ESR9, Matteo Vagnoli, at the beginning of August 2016, for Casentino Più, a mainstream monthly Italian magazine. In the interview, Matteo spoke about TRUSS, the objectives of his research and his future goals. The interview has now been published in the October issue of “Casentino più” magazine under the gold list Section in an article titled “Excellencies, the “brains” Casentino you are a credit abroad!” (“Eccellenze, i “cervelli” casentinesi che si fanno onore all’estero!” in Italian)

Eugenio Milizia covers young Casentino (generally under 40), who, through sacrifice and studies have been accomplished in their field. Interviewing them, they realized that some of them had found their way not in Casentino, and even in Italy, but abroad. 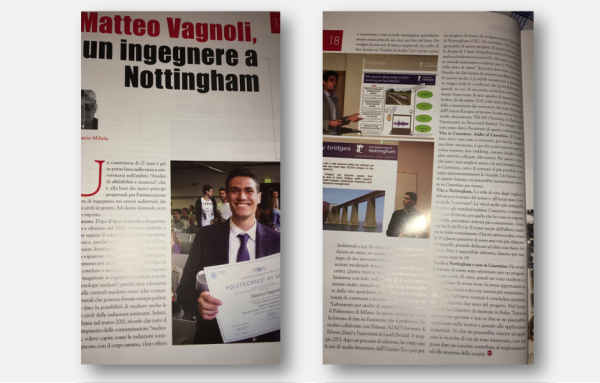 The article above collects the stories of eight young Casentinos and their pictures can be found in the photo gallery on the Casentino Piu Magazine website (external link).

A second interview to Matteo is published by Francesca Manganion in the newspaper “La nazione”(*) on the 2nd October 2016. The title of the chronicle is “They fly in the studies here, smashing abroad: the story of Matteo and Costanza” (“Volano negli studi qui, sfondano all’estero: la storia di Matteo e Costanza” in Italian).

In the article, you can read how the young Casentino Matteo Vagnoli “fled abroad” in search of better opportunities, higher earnings and some satisfaction.  Matteo, born in Bibbiena 27 years ago, has a nuclear engineer degree achieved in record time at the Polytechnic of Milan, and following praise and excellent track record with major publications thanks a year of waiting for the master’s degree research, Matteo sought an opportunity abroad, winning a scholarship funded by the European Union at University of Nottingham. He then moved to the UK where he now resides. Matteo feels that his skills abroad are valued much more than at home. In the short term, his dream is to get to create something that will have an impact on the daily life of the company, but he would also like to succeed in the long term to make something of his own, that is able to connect with his passion for nature with life daily and work.

To read the entire article, visit the website of “La Nazione” at http://www.lanazione.it/arezzo/cronaca/volano-negli-studi-qui-sfondano-all-estero-la-storia-di-matteo-e-costanza-1.2561987
Find out about other communications by TRUSS
Arturo Gonzalez 2017-07-24T10:48:00+00:00