The defense started at 12 am with a presentation in English language by Antonio where he reviewed the research carried out, the methodology used, the thesis content and specially the original contributions stemming from the research, and the conclusions and research to be carried out in the future. Once Antonio presented the thesis in about one hour to an audience of near 20 people including supervisors, jury, researchers, academic staff and Antonio’s relatives and friends, the members of the panel congratulated the candidate and supervisors for the work, and posed questions and requested clarification of points they deemed necessary. The secretary announced that those present who could demonstrate that they hold a PhD could also put forward questions. Once the defence and the discussions were over, and the audience had left the room, each of the members of the examination panel put forward, in the form of a standard document, their individual assessment of the thesis, to be appended to the Doctoral Student Activity Report. The overall mark can be: ‘Unsatisfactory’, ‘Satisfactory’, ‘Good’ ‘ or Very Good’, which is then recorded in the official examination results that all the members of the panel had to sign. All members agreed that the thesis was of the highest standards, that it represented a very significant contribution to the field of Structural Health Monitoring, and that Antonio had defended its contents very convincingly. Before adjourning the session, the chair verbally communicated the awarded mark of ‘Very Good’ to Antonio and to the rest of the people present. Given that the global mark awarded was ‘Very Good’, the members of the panel decided to propose a cum laude distinction by secret ballot (forwarded to the Doctoral Studies Committee following regulations), where they had to state the reasons for this decision: i.e., a significant advance in the state of knowledge, accredited by publications in indexed journals of proven relevance in the field (e.g. JCR indexed journals), approval of the contributions by the scientific and academic community, accredited by the dissemination of results at leading conferences in the field, and other reasons related to its scientific relevance, socioeconomic impact or patenting. The Doctoral Studies Committee then counted the votes and in accordance with Article 14.7 of Royal Decree 99/2011 of 28 January, which regulates official doctoral degree courses, decided to award Antonio with a mark of Excellent Cum Laude. 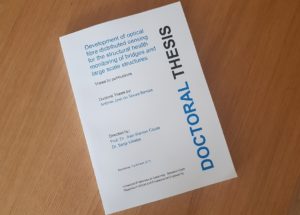 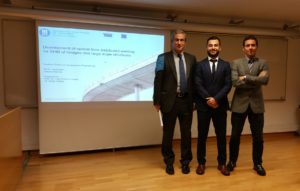 The contributions of the thesis can be divided into three main parts:

The contents of the thesis in regard to novelty/originality, validation and significance of the contributions clearly meet the standards required for a doctoral degree. The published journal papers are evidence of the value of this research for future applications in SHM of civil infrastructure. The format of the thesis was in the form of a compendium of papers. It included 3 papers that had already been published in prestigious journals with high JCR impact and 2 papers submitted for journal publication that are under review (one has currently been accepted). During the time in TRUSS, in addition to the papers included in his thesis, Antonio has published one more journal paper, one book chapter and twelve conference papers, one of which has been invited in an extended version to a special issue of another journal. A great success and a truly remarkable achievement in a period of only three years.

In this doctoral thesis it is proposed to research and assess the performance of the use of distributed optical fiber sensors (DOFS), more specifically the case of the optical backscattered reflectometry (OBR) based system, to the structural health monitoring (SHM) of bridges and large-scale structures. This is a relatively recent technology that has demonstrated great promise for monitoring applications in a wide range of fields but due to its novelty, still presents several uncertainties which prevent its use in a more systematic and efficient way in civil engineering infrastructures. This is even more evident and relevant in the case of the application of this sensing technique to concrete structures. In this way, this thesis pretends to continue and further analyse this topic following the initial applications using the OBR system as a possible alternative/complementary monitoring tool in concrete structures. Therefore, in the present thesis, after an initial and thorough literature review on the use of DOFS in civil engineering applications, a set of experiments and analysis is planned and carried out. Firstly, different laboratory experimental campaigns are devised where multiple aspects of the instrumentation of DOFS technology in civil engineering applications are assessed and scrutinized. Consequently, the study of new implementation methods, comparison and performance analysis of different bonding adhesives and spatial resolution is performed through the conduction of load tests in reinforced concrete beam elements instrumented with OBR DOFS technology. Moreover, the long-term reliability of this sensing typology is also assessed through the conduction of a fatigue load test on two additional reinforced concrete beams.
Afterward, the use of the OBR system technology is assessed for the application in two real-world structures in Barcelona, Spain. The first application corresponds to a previous monitoring work conducted in a historic masonry building and UNESCO World Heritage Site, which was subjected to rehabilitation works and where the collected data was analysed and interpreted in this thesis. The second real-world structure application is an urban prestressed concrete viaduct that was exposed to major renovation actions, which included the widening of its deck and the introduction of new steel elements on the improved pedestrian sidewalks. This second application was conducted through a relatively extended period of time, which spanned from early summer to deep winter and therefore causing subsequent important thermal variations effects implications on the performance of the instrumented OBR system leading to the necessity of its compensation.
Finally, taking into account the previous points, several conclusions are obtained related with the proficiency and limitations on the use of this particular type of optical sensing system in concrete structures. The advantages and disadvantages on the use of different types of bonding adhesives, implementation methodologies and spatial resolutions are described. Additionally, the performance of this technology in real-world conditions is studied and characterized. -> Read more about the research by Antonio in TRUSS