TRA VISIONS 2018 Young Researchers competition is the largest competition for Young Researchers in Europe for the transport industry and takes place every two years. The best final year and PhD students in Europe compete with each other. This year’s winners were selected out of 169 young researchers from 56 different European universities that submitted 122 ideas for the transport modes road, rail, waterborne and cross-modal. The shortlisting event took place at the European Commission’s DG Research in Brussels, Belgium on Friday 15th February with the participation of TRA VISIONS 2018 Project Officer Patrick Mercier-Handisyde and TRA VISIONS 2018 Project Coordinator George Smyrnakis. Three winners were chosen per mode (road, rail, waterborne and multi-modal) for the Young Researcher competition. The winners were all invited to the Transport Research Arena (TRA) from 16-19th April 2018 in Vienna, Austria, where €10,000 were awarded in prizes per mode sponsored by industrial partners. Federico Perrotta (ESR13) was one of this year’s top 3 winners, he received a €2000 money prize, and he was invited to participate in the prestigious award ceremony (picture below) that took place during the 2018 Transportation Research Arena (TRA 2018) conference (http://www.traconference.eu/), with more than 3,600 participants, in Vienna, Austria, on the 16th of April at 12:00 all expenses paid. 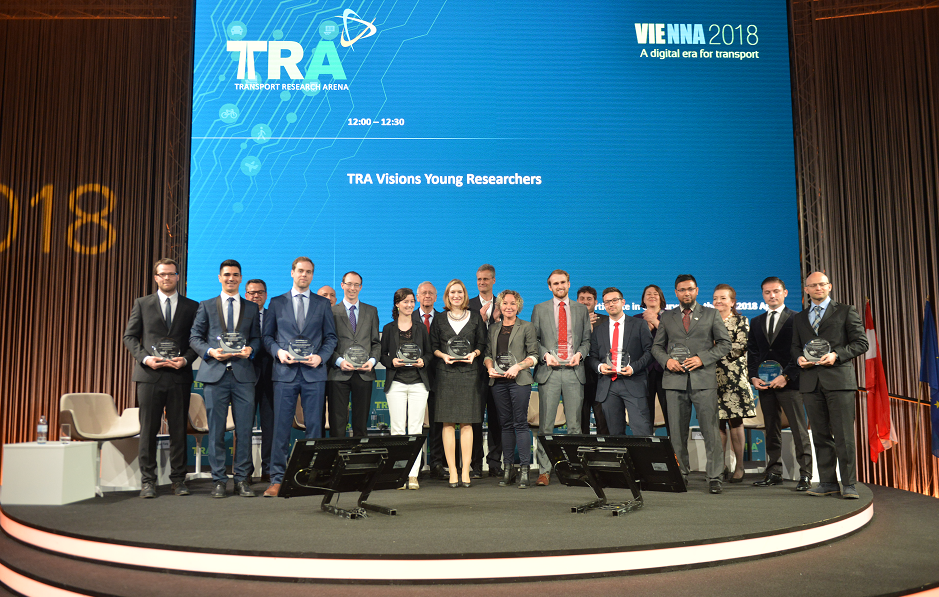 In the road sector, the winners were Mareike Hedderich from Munich University of the Federal Armed Forces (Park Spot Routing), Irene Martinez from Universidad Politecnica de Catalunya (Location of Variable Speed Limit application area to avoid capacity drop) and Federico Perrotta (TRUSS ESR13) from University of Nottingham (Evaluation of road pavements fuel efficiency using truck sensors data) (source). Federico’s proposal was exhibited inside the TRAVISIONS 2018 booth inside TRA (in Foyer A just before the Congress area). A poster of 800mm width and 1200mm  height displayed the idea developed by Federico in TRUSS. Federico, together with the other winners, were asked to spend sometime (mainly during coffee breaks and lunches) at the TRAVISIONS booth in order to explain their vision to the visitors. These ideas are included in the TRAVISIONS book that will be widely disseminated and it is available in pdf here

. Industrial participants saw Federico’s project and also his name and contact details and will be able to contact him in case they want to further develop his idea and turn it into a real product. 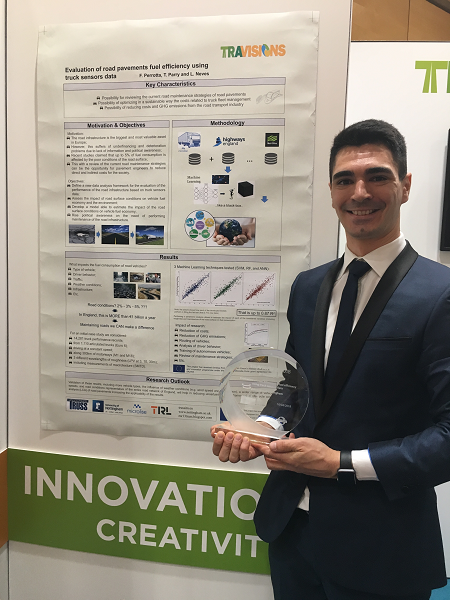 Federico holding the award in front of his poster, TRA 2018

The conference had more than 3000 delegates from all sectors of the Transport Industry (road rail aerospace and marine) from research, industry, public administration and politics and about 60countries and it was an excellent networking opportunity for Federico. TRA combines a 4-day conference programme with an exhibition (7000m² exhibition area with over 90 exhibitors), live demonstrations, networking events and award ceremonies. In total, 1815 minutes of conference programme in 4 days and more than 650 presentations in about 100 sessions. More information on this event can be found on TRA VISIONS 2018 and in the video by the organisers featured below.